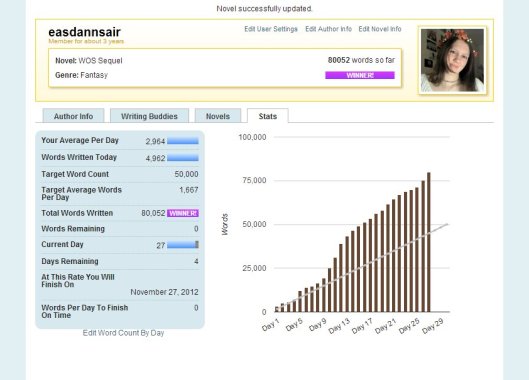 I finished my novel last night.

I wrote the ending two scenes and the epilogue about 4 days ago, and then went back to fill in the 10k that was missing. Not the best way of writing, but it did have some positives.

Yesterday I finished the final scene (one about 5 scenes before the end) and though “I barely described anything. And I’ve killed off a villain who I only introduced two scenes ago. Really, he’s not much of a villain.”

So I wrote more – I added background and some actual details about the key places like rooms visited a lot and after finally reaching 79k – matching the 79,200 of the first book in the series, I found the 800 words weren’t too much of a stretch.

I still don’t really have a villain. But I’ve been writing these characters since January. I have written or planned the storyline in this world EVERY DAY since the beginning of September.

This is my forth year of “winning”, but it’s the first year I feel I’ve won fair and square. I didn’t plaugerise another storyline, didn’t have a character sing a song all the way through, including the chorus every time… and I didn’t panic on the final day and paste Finnish poems and their english translations into the “epilogue” (See last year for details).

I finished a storyline, with a few days to go, and on average that meant writing 2,900 a day. True, I’m living at home with no job, but this year I tracked my rough hours, and worked out that I only spent 65 hours writing. That’s an average of 2.4 hours per day, which could be fit into an evening after work, if necessary.

NaNoWriMo, for me, was the first step into realising I could create my future. It was my step in to Redefinition Alchemy and the first thing that made me go “if I want to be an author, why don’t I write a book?”

In hindsight, it sounds like a ridiculous comment; but thinking about the labels of “an avid reader” or ” a lover of artwork” – are you actually doing the things you want to be in your future?

Where To Go From Here

I’m not sure. I have a lot of ideas for the third book – possibly the last in the series; though to be honest, I’ve built up a world that I’d love to explore for many more hundreds of words. But the main characters from book 1 will end at book 3.

And the only way to improve my world-building skills is to practise.

Currently, I’m taking at LEAST four days off and then I’ll have a look at Resilience again – probably my favourite idea for a book ever; though I’ve tried to re-write the 20k I have about 15 times. I can’t find the right place to begin the story; so I’m going to try and plot it as if it’s a new book.

I’ll let you know how it goes.

But it’s not gone quite so smoothly as I’d hoped. Of those 20 days, I’ve hated my novel for 7 of them. In terms of something being “loved”, two-thirds isn’t really good enough for me.

But today, I’ve clawed my way back out, having written a minimum of 2000 words no matter what, because to reach my goal, I really need to hit 2,500 a day from now. So I wrote 2k a day, of bits I hated, or padding out descriptions in prior scenes. Now I’m finally back on the trail. It’s still not very easy, but I’m connecting with so many other writers – on the forum, via twitter, using tags and labels and blogs… and today I wrote a scene I loved.

And that’s worth every struggle.

I met the goal in 2009, though the ideas were very much stolen from another set of books.
In 2010, I wrote the ideas myself but had a lot of loose ends and half-written scenes. I didn’t finish the story, though a book was ‘done’.
In 2011, I used a lot of cheats to win.

But I’ve completed it 3 years in a row.

This year, I decided not to use any cheats. I use a # to denote the end of scene, as is common practise in manuscripts. I have chapters which adds 2 words every 5000 odd. I even have two-half scenes at the end; which I hope to include, but didn’t want to happen until later in the book. I wrote them in the 30 days, so I’m counting them.

I thought this year would be harder, and so far it is.

As Rachel Aaron pointed out on the forums, a sequel is harder.

As someone who’s currently finishing up the third book in her second series, I’m of the opinion that second books are the hardest, because you’re still figuring out the world and the characters to a large extent, only now, thanks to book 1, you can’t just change everything to suit your plot.

So I never expected to write 5,019 words on day 5. I didn’t expect to suddenly be ahead by three days. Yesterday, I wrote 5,925. And I’ve been keeping track of the actual time spent writing, to give me an average words per hour and and idea of how many hours it takes to write a novel.

I’ve been using a tag on twitter to do word sprints, where you set a time of say, 15 minutes, and see how many words you can write, and then compare it to others. I’ve begun running my own with friends and strangers who wanted to do extra ones.

This year I’ve also ended up with more people ahead of me (in terms of word-count) than behind me, which is rare. It’s an odd feeling to wake up and find people are 6-10k ahead of my own, also-ahead goal. Yesterday morning, one of my new NaNoBuddies in Aus (so it was the end of day 10 for them) was at 33k.

I thought after three years and having written the first novel, this would be more familiar. Not easier, but that I’d know what to expect. Instead, I’m wondering if I can meet a higher goal than the 50k in 30 days, and desperately trying to catch up with my friend who reached 30k as I passed 25.

If I can reach 30k tonight  I might actually finish the book by the end of the month, reaching 85k. However, I’ve only got the next four scenes planned out and I’m aware of all the things I need to do about my new job, finding a flat, de-cluttering and packing for the move, writing my blog, practising driving, doing housework, working out finances and such.

NaNoWriMo is always one of those things I look forward to, although I’ve attempted just as many novels outside of November too. What I hadn’t expected was the connection with others, the ability to prove I can write 650 words in 15 minutes and the way a novel kind of makes itself once your make the world and characters real.

Just create characters, set them down in a place, and they will live.